“45-percent of the population there is of Middle Eastern extraction. So, we sent Watters to Dearborn to check things out.”

The four minute long segment was so jammed-packed with racism, religious bigotry and anti-Muslim hysteria that the Council on American-Islamic Relations (CAIR) released a statement denouncing it.

“It would be difficult for anyone to pack more racist and Islamophobic stereotypes and misinformation into a single segment. Once again, instead of a nuanced look at America’s rich ethnic and religious diversity, Fox News offers only crude caricatures of Muslims and Arab-Americans.”

“There are a lot of people who are going to watch that, and they’re going to believe that there is some truth to sharia law or honor killings or any of that nonsense that they were promoting.”

The mayor went on to correct some of the lies put forth in the segment, including the myth that the city council is “controlled by Muslims.”

“They said the majority of the council are Muslim and the chief of police is Muslim; well, no. More importantly, when you look at the two Muslims on city council, they’re both attorneys. Being an attorney, you swear to uphold the Constitution. They can’t be supporting sharia law if they’ve taken a solemn oath to support the Constitution.”

The City of Dearborn has been the focus of right wing Islamophobia many times in the past. City Council President Susan Dabaja says she regularly receives emails from people asking her if Dearborn is under sharia law. About the emails, Dabaja said,

“I reply with the same response every time. I write back, ‘The city of Dearborn is governed by the U.S. Constitution, the Michigan Constitution and the city charter.’ I was elected to uphold these three documents — the law of the land. That’s it.”

“While we share a common name and heritage, I am compelled to respond to your piece on Dearborn last night in which you were really spinning the truth. While I understand that segment was intended to be lighter fare, its presentation of false ‘facts’ is dishonest and has unplanned, and very negative, consequences.”

As it turns out, the mayor was correct.
After the segment aired on The O’Reilly Factor, the video began making its way around social media circles, and right wing nuts exploded in a fit of racism and religious bigotry. Among the Islamophobic hysterics were multiple calls for the city of Dearborn, Michigan to be bombed.
Someone posting on Bill O’Reilly’s Facebook fan page under the name Richard Cowan called for the Michigan city to be bombed in order to “send them packing.”

But Cowan wasn’t alone in his response to the segment. Here are some of the “best” from Bill O’Reilly’s Facebook fan page.

ome right wingers are claiming that the Watter’s World segment was a joke.

The problem is that Fox knows damn well their audience is not going to question a single “fact” presented by the network. These are people who believe that Fox is the one and only “true source” of information on what’s going on in the world. They have “Don’t Believe The Liberal Media” bumper stickers plastered on their pickup trucks, and honestly, there’s a war on Christmas and the Easter Bunny, only because Fox says so.
Reading the comments from Fox fans, there’s no doubt that they believe every single lie put forth in the segment.
Here are even more from Bill O’Reilly’s Facebook fan page. 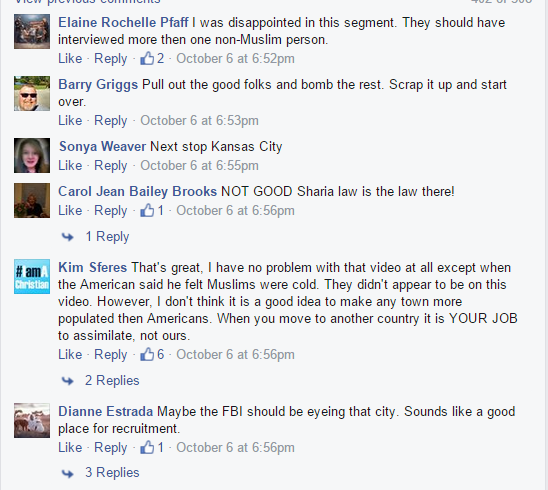 And on and on it goes: 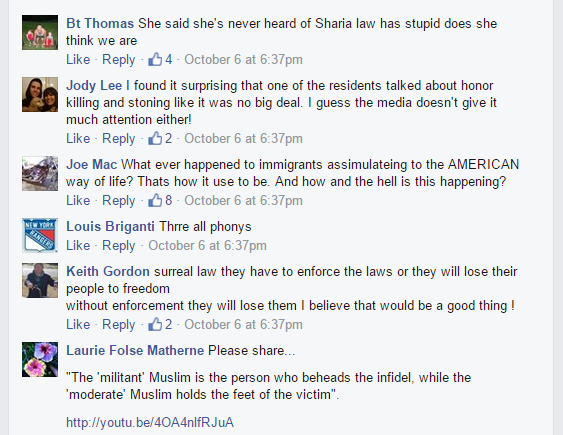 Besides believing that Dearborn is under Sharia law, that there are honor killings and stonings in the city, that it’s a haven for “Muslim-terrorists,” and a whole bunch of other lies, at least one person also believes that Dearborn’s Mayor, Jack O’Reilly, is a Muslim who practices sharia law. 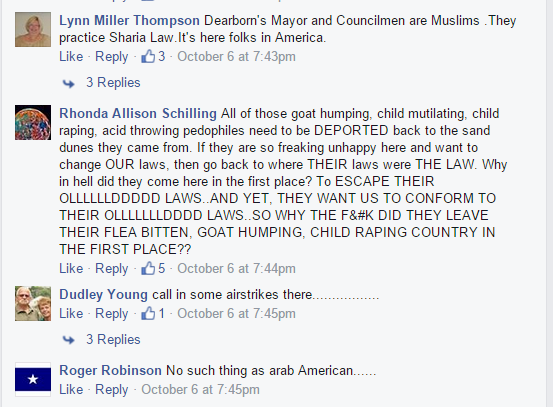 There are literally hundreds of similar anti-Muslim comments on Facebook, all from the Islamophobes who follow Fox News.
There’s no doubt that the segment was designed to cater to the right wing’s racist and religiously bigoted base.  As you can see from the comments, Fox fans responded to the segment exactly the way the network knew they would — with fear, hate, vicious racism, religious bigotry, and calls for violence against the city.
Posted by pooja