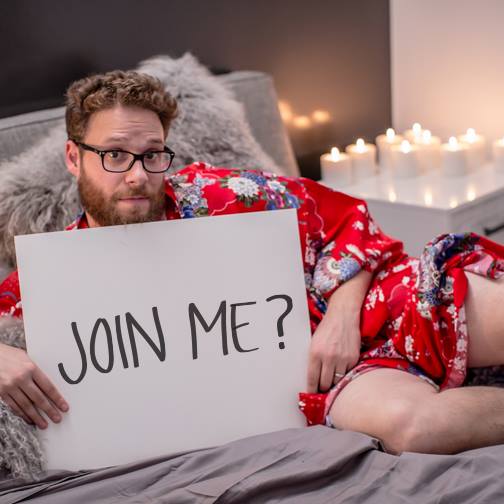 It was a short tweet, but actor Seth Rogen definitely made it clear how he feels about Ben Carson.
Earlier this week, the retired neurosurgeon and Republican presidential wannabe defended the Second Amendment by insisting that the Holocaust would not have happened if the Jews had been armed.
“I think the likelihood of Hitler being able to accomplish his goals would have been greatly diminished if the people had been armed,” Carson told CNN host Wolf Blitzer on Thursday in the wake of a mass shooting on an Oregon college campus. “I’m telling you there is a reason these dictatorial people take guns first.”
Time Magazine points out that Carson also “blames the horror of the Holocaust on Nazi gun control laws in his latest book, A Perfect Union.”
The Anti-Defamation League was very quick to condemn Carson and his offensive statements.
“Ben Carson has a right to his views on gun control, but the notion that Hitler’s gun-control policy contributed to the Holocaust is historically inaccurate,” ADL National Director Jonathan Greenblatt told ABC. The small number of personal firearms available to Germany’s Jews in 1938 could in no way have stopped the totalitarian power of the Nazi German state.”
Indeed, Hitler had already built a formidable military machine that basically no one could stop. In fact it took seven years and the combined military might of several nations to bring the Nazis down. Yet Carson claims the Jews could have stopped Hitler, his brutal SS units, his Panzer tanks, and his Luftwaffe (Air Force) with a just a few more guns.
And that’s why when Seth Rogen read about Carson’s remarks he only had this simple reaction.

In fact, Rogen was so pissed off at Carson that he ended up saying it again on Twitter. 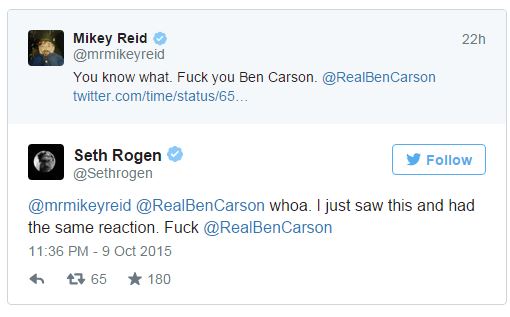 Seriously though, Ben Carson needs to check himself into a hospital because he clearly has some sort of mental illness that goes beyond just being a conservative.