US Police Officer Orders a Coffee From Dunkin’ Donuts — as He Walks Out, He Notices a Message Scrawled on His Cup

After buying coffee from a Dunkin’ Donuts, a Providence, Rhode Island, police officer found an “unacceptable” message scrawled on the side of the cup that has one of his fellow officers asking, “Where does it end?” 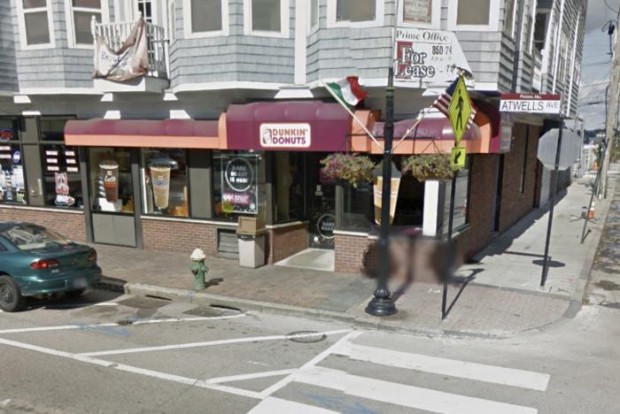 William “Billy” O’Donnell said that as he and one of his colleagues were walking out of the donut shop they noticed a worker had written “#blacklivesmatter” on the side of his coworker’s cup. So O’Donnell took a picture of the message and posted it, with an account of what happened, on Facebook, GoLocalProv.com reported. 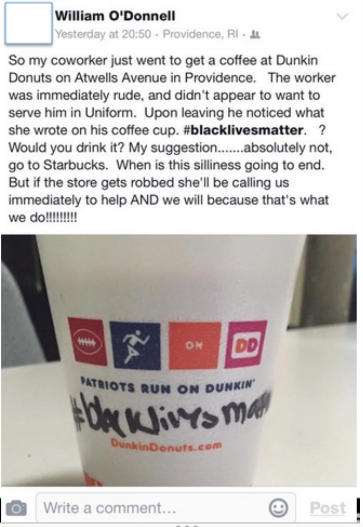 “So my coworker just went to get a coffee at Dunkin Donuts on Atwells Avenue in Providence. The worker was immediately rude, and didn’t appear to want to serve him in uniform,” O’Donnell wrote in the post.
“Upon leaving he noticed what she wrote on his coffee cup. #blacklivesmatter. ? Would you drink it? My suggestion…….absolutely not, go to Starbucks,” O’Donnell added. “When is this silliness going to end. But if the store gets robbed she’ll be calling us immediately to help AND we will because that’s what we do!!!!!!!”
Providence Fraternal Order of Police Vice President Mike Iamondi called the behavior “unacceptable.” He further stated that what happened does not appear to be a reflection on the owner of the Dunkin’ Donuts location but the action of a single employee. However, it wasn’t immediately clear what, if any, action might be taken to deal with the incident.
“I’ll tell you right now,  this is not a game. We’re tired of being the whipping boys.  The few random acts of police overstepping their bounds nationally – there are more incidents of police officers handling themselves in professional manner, every day,” Iamondi said.
The Providence FOP was scheduled to meet and discuss the incident Sunday, according to GoLocalProv.com.
“This is unacceptable – all lives matter,” Iamondi said. “Has it gotten to the point everywhere we go, do we have to wonder if someone is going to try and slip us something and without us knowing?”
“Where does it end?” Iamondi wondered.
A representative for Dunkin’ Donuts told Boston.com that the company wants each of its guests to be treated well and apologized for the incident.
Posted by pooja