China founded a new city on Tuesday more than 200 miles from the mainland, in a bid to cement control over 800,000 squares miles of the South China Sea. 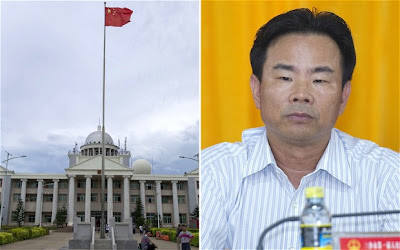 Sansha is based on Yongxing Dao, or Woody Island, a petite heart-shaped island barely a mile long. It is shorter than its airport runway, which is left jutting out to sea.

China's 657th city, as classified by the country's State Council, has a floating population of a few hundred fishermen, a post office, library, bank, supermarket, and hospital and not much else. A casino is planned to drum up tourism.

But it will have a full 45 government officials to run the city, its own mayor, and a Communist party secretary, Fu Zhuang, who has spent his entire career in the People's Liberation Army, rising to become the deputy chief of the Air Defence Office of Hainan province.

It will also have a military garrison, responsible for "national defence mobilisation ... and carrying out military missions".

From here, China expects to administer almost the entire South China Sea, including both the Paracel and Spratly island chains.

That will pit it directly against Vietnam, the Philippines, Malaysia, Taiwan and Brunei, all of which also claim sovereignty over parts of the region.

Indeed, China only gained control of Woody Island in 1974 after a battle with Vietnam left 71 sailors dead and the founding of Sansha has already been vigorously condemned by the Philippines and Vietnam.

Military analysts have pointed to the new city as a worrying sign of China's increasing assertiveness in the region, and its determination to face off against the United States, which has pivoted its military focus back towards Asia.

But Su Hao, the head of the Strategy and Conflict Management centre at China's Foreign Affairs university, said Chinese policy in the South China sea remains "reactive", rather than aggressive.

"The countries around the South China Sea want to reinforce their own claims and defend their own interests before China gets too strong," he said. "The US is also worried about China, and has been directly or indirectly supporting these countries so they have more strength to stand up to China," he added.

For years, Vietnam and the Philippines in particular have been building up their presence in the Paracel and Spratly chains.

In the Spratly Islands, Vietnam has stationed 600 soldiers and built a town with its own hotel, school and temple. Most recently, it approved six Buddhist monks to be abbots on various islets and reefs; islands with settled civilian populations raise the stakes for any military action.

China, however, has struggled to populate islands so far away from its mainland, and in the Spratly's there are often as few as 10 Chinese fishing boats operating on any given day according to the Hainan Fishery Research Institute. Many Chinese fishermen are worried for their safety: since 1989 there have been 380 assaults on Chinese vessels and 800 fishermen have been jailed, with 25 killed or missing.

China has also recently offered nine blocks for oil exploration in the region, which have already been auctioned by Vietnam, but Mr Su said that, until now, China has not had a single oil well within the zone it claims sovereignty over, but there are 800 wells being operated by foreign companies. "China has to defend its own rights. But in fact our response has been a bit slow," he said.

Nevertheless, the founding of Sansha signals trouble ahead. "There will be more tension in the future. But the other countries are much less powerful than China," he said. "They would have to lose their heads to start a fight."
Posted by pooja