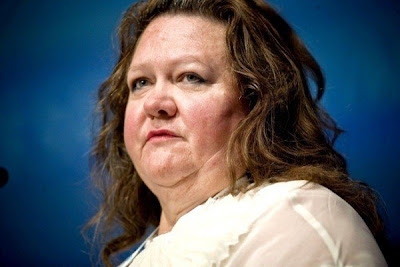 Just in case you were beginning to think rich people were deeply misunderstood and that they feel the pain of those who are less fortunate, here's the world's wealthiest woman, Australian mining tycoon Gina Rinehart, with some helpful advice.

"If you're jealous of those with more money, don't just sit there and complain," she said in a magazine piece. "Do something to make more money yourself -- spend less time drinking or smoking and socialising, and more time working."

Rinehart made her money the old-fashioned way: She inherited it. Her family iron ore prospecting fortune of $30.1 billion makes her Australia's wealthiest person and the richest woman on the planet.

"There is no monopoly on becoming a millionaire," she said by way of encouragement.

"Become one of those people who work hard, invest and build, and at the same time create employment and opportunities for others."

Why are people poor? Rinehart blamed what she described as "socialist," anti-business government policies, and urged Australian officials to lower the minimum wage and cut taxes.

"The millionaires and billionaires who choose to invest in Australia are actually those who most help the poor and our young," she said. "This secret needs to be spread widely."

And now it's out there.