This ad appeared Saturday in The New York Times… “Susan Rice has a blind spot: Genocide,” 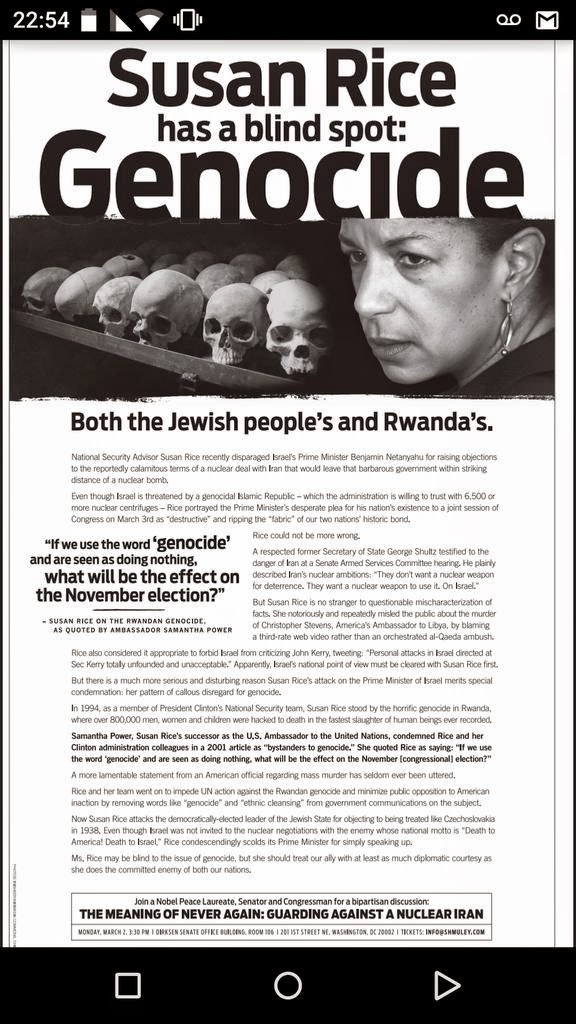 The ad attacks Obama’s National Security Advisor Susan Rice and her history of genocide.
Rabbi Shmuley wrote this at his website.

Need someone to fraudulently blame the murder of an American Ambassador in Libya on a stupid film? Send Susan to the Sunday talk shows.
Need someone to savage the leader of the only democracy in the Middle East as damaging the “fabric” of Israel’s relationship with the United States? Put Susan in the makeup chair of Charlie Rose.
Yes, it seems there is nothing Susan isn’t prepared to do.
And why should that surprise us?
This is the same Susan Rice who forbade Israel from criticizing John Kerry in her infamous tweet: “Personal attacks in Israel directed at Sec Kerry totally unfounded and unacceptable.” Yes, Israel’s freedom of expression is circumscribed by none other than Susan Rice.
But there is another reason Susan Rice’s attack on the Prime Minister of Israel on Charlie Rose merits special opprobrium and that is the unique insensitivity she is famous for when it comes to genocide.
Iran is threatening to annihilate Israel. It is building the bombs to make that possible. It has lied to the world for more than a decade about its nuclear program. Iran is an oil superpower and energy exporter that needs nuclear energy about as much as I need a pork sandwich.
America is about to do a bad deal with Iran that will leave them something in the range of 5000 spinning centrifuges enriching Uranium. Israel is not party to the talks. It has been cast in the same position of Czechoslovakia in the Munich agreement of 1938 where Britain and France negotiated away Czech security (and much of the country) without the Czechs even allowed to be present.
And while Israel faces the possibility of genocide, Susan Rice shows gross insensitivity to an Israeli leader for simply speaking out.
But why shouldn’t Netanyahu entrust Israeli security to Susan Rice?
Perhaps its because of her record of trivializing genocide.