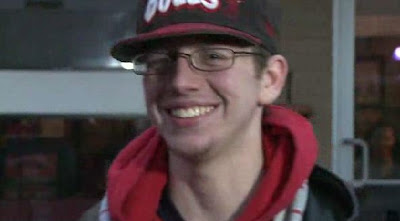 Art Bouvier, the owner of a New Orleans-inspired restaurant located in Indianapolis saw a young man trudging through the early morning snow and ice last week. The teen stopped to ask Bouvier — who owns Papa Roux Po Boys and Cajun Food– how much further it might be to his final destination and was told it was six to seven miles.
“He thanked me and continued on,” Bouvier, who also goes by Papa, wrote of the encounter in a now viral Facebook post. “He could have asked me for money for a bus. In fact I quite expected him to. He didn’t. He just started walking.”
To a local news station, Fox 59, Bouvier added that the teen later said he wouldn’t have money for a bus ride until he got a job.
Bouvier continued in his post that 15 minutes later he was in the car and told his wife to pull over when he spotted the teen — still walking.
That’s when he found out the 18-year-old named  Jhaqueil Reagan had intended to walk a full 10 miles for a job interview. The Bouviers gave Reagan a ride the rest of the distance — but that’s not all.
“I’m thinking to myself, here’s a kid walking almost 10 miles in the ice and slush and snow for the hope of a job at minimum wage,” Bouvier told Fox 59. “That’s the kind of story your parents used to tell, my parents used to tell, up both ways in the snow.”
Bouvier took Reagan’s phone number advising him to keep his interview, but noted he would see if he could hire him at Papa Roux.
In a phone interview with TheBlaze, Bouvier went on to say he told Reagan whatever the other shop offered him, he would double it. Bouvier then told us that Reagan later learned although he did well in the interview with the other establishment, the position had already been filled.
“It’s been a while since I’ve met someone so young with a work ethic like that!” Bouvier continued writing.
When he saw Reagan walking two hours ahead of his interview to ensure he would be on time, Bouvier told TheBlaze he knew it was a sign of his work ethic.
“I tell every single applicant, I can show you the ropes, but what I can’t teach is work ethic. Show up. Be on time. Don’t disappoint your crew,” Bouvier said, giving the example of poor work ethic as those who call at 9:55 to say they won’t make their 10:00 shift. “You know before 9:55 you aren’t going to make that shift. …I don’t think I’ll ever get that 9:55 phone call from [Reagan].”
Fox 59 had Reagan’s reaction to the news that he got a job at Papa Roux Friday:

“I’m lucky I met him,” Reagan said. “I’m really lucky I met him.”
Reagan said it’s been hard finding opportunities. He was forced to quit school two years ago when his mother died. He completed his GED while staying home to care for his siblings.
Now that he has a job, and a following on Facebook?
“It’s crazy. I don’t even know. It’s really crazy,” Reagan said. “My heart’s just racing right now. I’m just too excited, just excited to start.”
“I can show you the ropes tonight if you want. We’re really busy in there,” Papa said to Reagan.
“Thank you very much,” Reagan said.

Bouvier told TheBlaze he wasn’t even sure he would have enough work to justify a new employee when he brought Reagan on.
“I do now though,” he added.
A local writer for the website Positively Indy, shared an account of this story and wrote it is the “terrific” food and stories like this that have him continuing to support Papa Roux.
“The people is where the magic is in this endeavor,” Jason Bean wrote.
It’s a gift of hospitality held by Bouvier and his wife that he told TheBlaze makes people feel welcome at his restaurant.
“I don’t think the Midwest culture knows what that feels like,” he said, adding though that he has noticed more and more places focusing on the customer relationship rather than the transaction in recent years.
In addition to having a job that would be only a three mile walk from home instead of 10 miles, the local transit authority IndyGo gave Reagan a one-year pass free of charge.
The Facebook post of the story issued Friday had more than 7,000 likes within a few hours, according to Fox 59, and as of Monday has more than 14,000 likes.
Posted by pooja